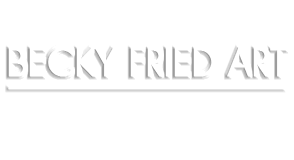 Becky is a native of Georgia and has been painting for over 25 years. Initially self taught, she was encouraged to pick up a brush by her high school and college art instructors. After a successful career in business, she returned to her first love, and studied with international artist and instructor Philomena O’Quinn Edwards.

Becky’s favorite subjects are those of natural beauty, landscapes, and animals. She loves the depth of color oil painting allows but often chooses acrylic for its versatility. Becky has developed a layering and reverse painting technique that she uses on glass to evoke a Folk Art feel to those pieces.

In 2007, Becky began entering juried shows at the Grandview Gallery in Atlanta, Georgia where she was accepted and has been exhibited. She exhibits in other Atlanta metropolitan locations which have included Studio M on Bennett in midtown Atlanta, the Cobb Museum of Art in Marietta, Plum Tree Salon in Roswell, Daily Grind Coffee Shop and Café in Marietta, and Basil’s Restaurant in Buckhead. Her Fantasy Collection can be seen and purchased from Pat-a-Cakes Bakery in Columbus, Georgia. Her work is held in private collections; she accepts commissions and has pieces for purchase.

My original art collections include…

I look forward to painting something new for you!